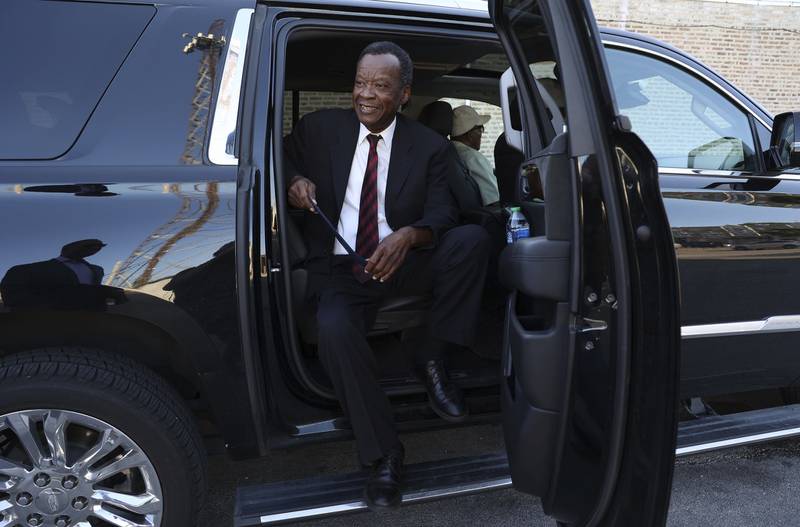 In a news release, he cited the pain of “soaring inflation” and noted that “lower income families spend approximately 77% of their income on necessities.”

“I see and hear the pain of my fellow citizens and I must help,” Wilson was quoted as saying.

These days, hardly a week goes by when he isn’t making a new handout to voters.

“Dr. Wilson has personally donated $1 million to help people who have lost their jobs due to the COVID-19 pandemic,” his news release claimed. “Also, he has donated $2 million to help 1,000 churches. He has committed $5.2 million for free gas and food.”

Since the beginning of the pandemic, Wilson has donated more than 30 million face masks, he says, to government agencies, including the city of Chicago, the CTA, Cook County Jail, several unions, 75 senior citizen homes and 22 community organizations.

No one would argue with his generosity, but Wilson is also running his second mayoral campaign, which exposes him to criticism from good government types who say his giveaways are an attempt to “buy votes.” Wilson has denied the charge, noting that he has been doing charitable work for decades, long before he got into politics.

Because the donations come via his personal foundation, it is perfectly legal. At least Wilson is donating his own money.

His fellow politicians are furiously trying to keep up, but their “generosity” comes courtesy of us — the taxpayers.

Thanks to an “avalanche” of federal stimulus funds, Lightfoot is “running for reelection armed with a seemingly bottomless gift bag of giveaways that includes everything from gas cards, Ventra cards, bicycles, locks and helmets to more than $1,000-per-household in rebates to defray the cost of security cameras, outdoor motion sensor lighting, cloud storage and GPS trackers to hunt down vehicles in the event of an auto theft or carjacking,” the Chicago Sun-Times reported in June.

Lightfoot’s “Chicago Moves,” is the city’s $12 million transit response to skyrocketing fuel costs and inflation. It will distribute up to 50,000 prepaid $150 gas cards and 100,000 prepaid $50 transit cards to Chicago residents.

Earlier this year, Lightfoot pushed through a controversial guaranteed income program for low-income families. The pilot program will provide no-strings-attached $500 payments to 5,000 Chicago families per month for a year. The recipients were chosen through a lottery system.

For months, Gov. J.B. Pritzker, who is running for reelection in the Nov. 8 election, has ballyhooed a $1.8 billion tax relief plan in his campaign ads. It provides short-term tax reductions and freezes on purchases of gas, groceries, and school supplies.

He is also touting the one-time rebates Illinois taxpayers will receive this fall. Individuals who earn less than $200,000 and married couples earning under $400,000 will receive $50 per taxpayer, plus $100 for each dependent child for up to three children.

Those rebates are expected to cost the state $685 million, the Tribune reported in July. An estimated 6.2 million taxpayers will get the payments.

Guess what? The money is “expected to begin going out the week of Sept. 12, and the state estimates it will take about eight weeks to get the money out to everyone who qualifies,” according to the Tribune. “That means the payments should be wrapping up right around Election Day.”

(Meanwhile, Pritzker’s opponent, Republican gubernatorial nominee Darren Bailey, proudly announced last week that his campaign would hand out one free $100 gas card each day, for four days at the Illinois State Fair. One gas card a day. Keep up, man!)

Nothing new, you say? Yes, politicians have been cultivating voters with giveaways since the dawn of politics. Government has always been about a chicken in every pot.

Speaking of poultry, back in the days of Mayor Richard J. Daley, Democratic Party-elected officials and their operatives regularly handed out free chickens, turkeys, winter outerwear and many other goodies to voters, especially in the run-up to Election Day. They always claim there is no quid pro quo.

Yet, more than ever, their blatant pandering is eroding trust and confidence in politics. Voters know their elected officials are spending our money in their own self-interest, not ours. In a political world overrun with corruption and malfeasance, it’s duly noted when politicians make these blatant appeals.

In the June 28 primary, 21.7% of Illinois voters cast a ballot. That was the second-lowest turnout in an Illinois primary in 40 years, according to the Illinois State Board of Elections.

Voters take the money and run.

Laura Washington is a political commentator and longtime Chicago journalist. Her columns appear in the Tribune each Monday. Write to her at [email protected].

Submit a letter, of no more than 400 words, to the editor here or email [email protected].