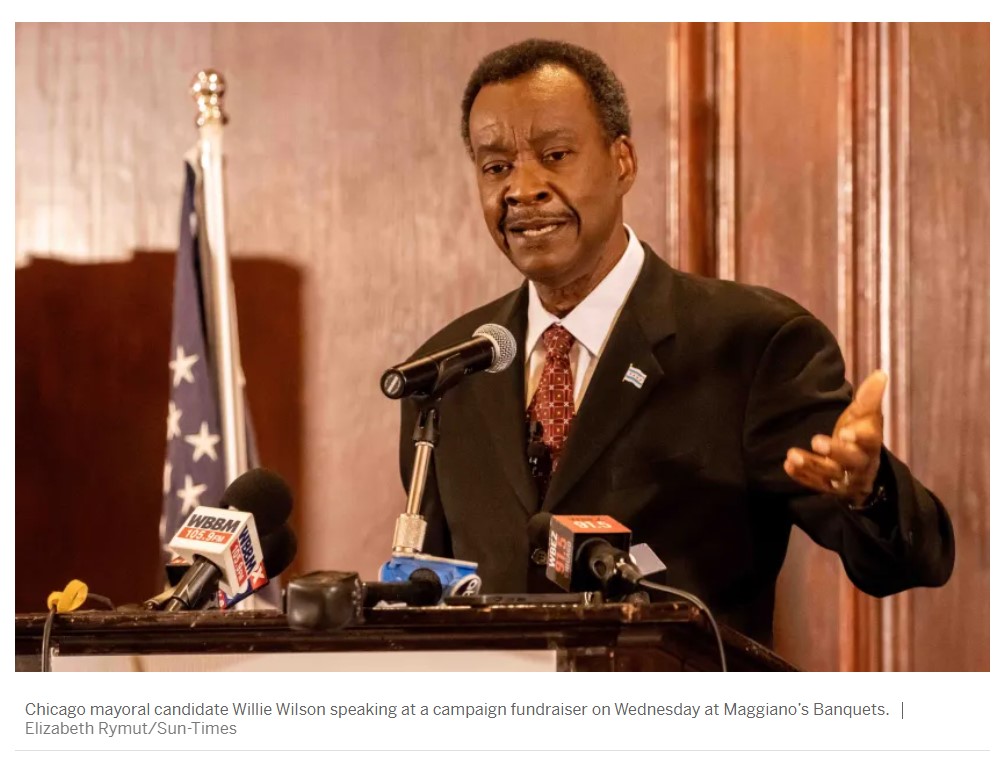 “We will take the handcuffs off the police and we will put the handcuffs on the people who are victimizing” residents, Wilson said. “If police officers continue to be like they are right now, I’m gonna move out of Chicago myself.”
By Fran Spielman Jul 13, 2022, 6:32pm CST

Millionaire businessman Willie Wilson vowed Wednesday to “take the handcuffs” off Chicago police officers — by eliminating policies that sharply restrict their ability to chase violent offenders, either with police vehicles or on foot.

“Our police officers are handcuffed by the administration. … We will take the handcuffs off the police and we will put the handcuffs on the people who are victimizing” law-abiding citizens, Wilson said.

“If police officers continue to be like they are right now, I’m gonna move out of Chicago myself. … They have to be free to do their jobs and protect us all. … We’ve put too many restrictions on our police officers. And the people who commit these crimes got us all scared. We have to take some of these restrictions off.”

In a speech at a fundraiser for his campaign, held in a River North banquet hall filled with supporters, Wilson outlined a laundry list of costly proposals aimed at confronting the one problem — violent crime — that public opinion polls show is foremost on the minds of Chicago residents, employees and visitors.

Arguing it makes no sense to have 50 alderpersons and one top cop, Wilson reiterated the promise he made during his 2019 mayoral campaign: hiring four police superintendents, with all of them reporting directly to the mayor.

“I will make it become a law that, before you finish high school or any school, you have to know at least one or two trades,” Wilson said.

Wilson also promised to make city assistance for Chicagoans who have lost their jobs a permanent part of the city budget.

No more pilot programs like the current guaranteed income test, which is giving 5,000 needy families $500 a month, no strings attached — but just for one year.

Public assistance, too, is a way to combat violence, he said.

“If somebody don’t have food at home, what do you think they’re gonna do? Common sense. I would do the same thing. If I didn’t have food at home and nobody is gonna give it to me, I would go out and steal food myself. Being real,” said Wilson, who has devoted millions of his personal fortune to recent food and gas giveaways.

“We have to make sure that we have a safety net — put away X amount of dollars on a line item — that when someone gets poor, or like COVID-19 hits and you lose your job, we must have the money to help bridge the gap until they can get on their feet again.”

If Wilson wins and implements all his crime-fighting ideas, it would cost cash-strapped Chicago taxpayers tens of millions of dollars at a time when an avalanche of federal stimulus funds is drying up.

Wilson did not outline how he would pay for all his plans, other than to say he is a businessman who knows how to live within his means and knows what to do to make the city do the same.

In fact, he promised to deprive the city of tens of millions of dollars by eliminating red-light cameras and reducing taxes, fines, and fees that, he claims, are causing people to either lose their homes, leave the city or both.

Willie Wilson, who’s running for mayor of Chicago, delivered a speech to a packed fundraiser at Maggiano’s Banquets on Wednesday, July 12, 2022.

At one point during a question-and-answer session after his speech — a speech interrupted repeatedly by rousing applause — Wilson was asked how he feels about Illinois’ concealed carry law.

The person who asked the question noted that, in Indiana, “You don’t have to conceal any longer” — it is, in fact, “illegal to conceal.”

“I do have a concealed carry [permit] myself. My father told me, ‘Don’t leave home without it,’ ” Wilson said to laughter.

“I do have three firearms. There probably needs to be one more. However, I do believe in background checks. I do believe in that. You’ve got to buy these cards to conceal and carry in Illinois. I think it’s a waste for them to continue to do that. It’s a way for them to make money. I have to pay for something every year or every four years on a piece of paper when they already know who I am.”