Willie Wilson donates another $1M to his mayoral campaign 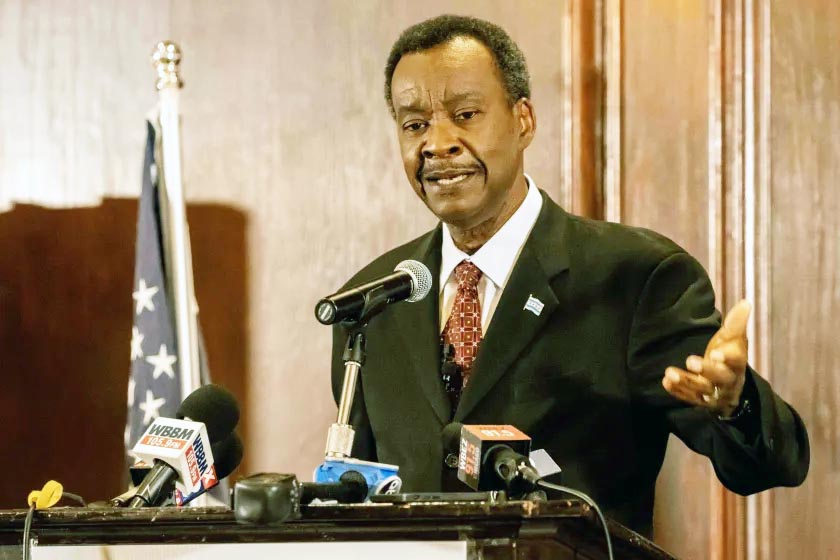 On the first day Mayor Lori Lightfoot and her challengers could circulate nominating petitions, Wilson told the Sun-Times he is prepared to devote another $3 million to the race — for a grand total of $9 million.

Millionaire businessman Willie Wilson on Tuesday loaned his mayoral campaign another $1 million, bringing to $6 million the share of his personal fortune he has devoted to unseating incumbent Mayor Lori Lightfoot.

As Lightfoot and her challengers hit the street on the first day to circulate nominating petitions, Wilson told the Sun-Times he is prepared to spend another $3 million on the race — for a grand total of $9 million — if that’s what it takes to defeat the embattled incumbent he endorsed in 2019.

His initial $5 million contribution to himself lifted the fundraising caps for all mayoral candidates, but Lightfoot has been unable to take full advantage.

She had $2.5 million in her campaign war chest — three times her next-highest competitor except Wilson — after raising $1.25 million during the second quarter.

But the mayor has raised less than $163,400 since, with no six-figure contributions. Lightfoot’s largest recent donations were $26,000 from Peter Kadens, chairman of Katalyst Management Collective LLC and $25,000 apiece from Clifford Law Offices and Lettuce Entertain You Restaurants mogul Richard Melman.

Wilson said he needs the extra $1 million to bankroll his “ground game.”

Mayoral candidates are generally advised to turn in two or three times the 12,500 required signatures from registered Chicago voters to avoid a costly and time-consuming petition challenge. Wilson’s goal is 100,000 signatures.

“The ground game is key for me. That and my [church] network. We’ve got a lot of people out here in the neighborhood that we have to pay. … We had 500-some petition passers yesterday. Pretty much all of our petitions will be completed by next Monday,” Wilson told the Sun-Times.

“And I will be going back on the air right after Labor Day. I’ve been on the air with three commercials. I do have five more commercials we’re getting done. And we had 183 billboards up in the Chicago area.”

Even before Wilson upped the ante to $6 million, Lightfoot was using her opponent’s deep pockets to rev up her own fundraising, though without mentioning Wilson’s name.

In an email to supporters last week titled, “Someone is trying to buy this seat,” Lightfoot’s campaign warned: “Even though we’re a little over six months away from Election Day, Mayor Lori Lightfoot’s opponent already has not one, not two but THREE ads on the air.”

“The worst part? Since he’s a multi-millionaire, he’s already self-funded his campaign with $5 million. He doesn’t have the grassroots support that our campaign does, but if we’re not careful, he’ll be able to dominate the airwaves. Help make sure that doesn’t happen.”

“She lost her [north lakefront] base. She never had an African-American base until I endorsed her.”

To do that, Reyes argued that Lightfoot needs anywhere from $6 million to $8 million.

“She needs to do better. If your polling numbers aren’t where you want them to be, you need to be able to tell your story. And the only way to tell your story is to communicate, which costs a lot of money,” Reyes said then.

“One week of good communication television, digital, mail is $700,000. So, she’s barely got 2.5 weeks of communication money. That’s not even counting staff and other political operations. You really need to have a minimum of 2-5 weeks of money to run a full-on campaign.”

The good news for Lightfoot is, no other declared mayoral candidate is raising much money except former Chicago Public Schools CEO Paul Vallas, who dropped $836,500 into his mayoral campaign fund in early July. But Vallas has reported no contributions since then.

The only formidable fundraising potential has been shown by Ald. Sophia King (4th), who has raised $115,500 since she entered the race for mayor two weeks ago.

That is, in part, how she out-raised her four opponents in the February 2017 4th Ward special election by a nearly six-to-one margin.